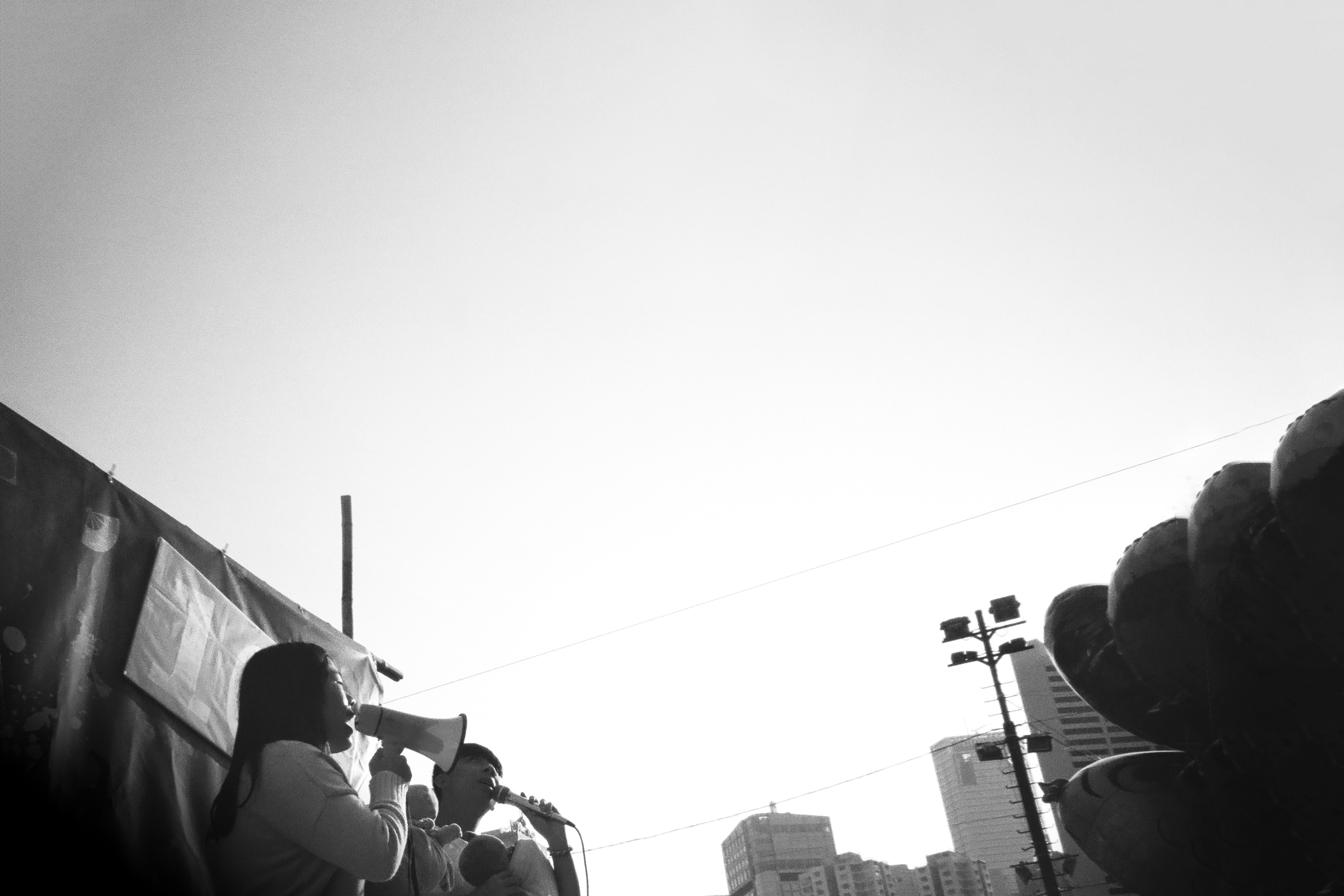 MAEKAN Session — The Need for Criticism

Listen to the Session (61 minutes)

The growth of social media gives off the perception that the world’s smaller and more connected, but conversely, this doesn’t necessarily make the world easier to understand. In our MAEKAN Session titled The Need for Criticism, we focused on the concept of critique in a social-media dominated creative landscape.

This session was our most globally expansive to date, with a panel dialing in from Australia, Asia, and America. The panel members originally met through a WhatsApp group centered around film photography. Through this connection, the speakers often spoke about critique and how that has changed in relation to a social media-driven environment. How does critique affect the creative landscape of 2018, and how can we grow more accustomed to the ways in which we receive critique?

The panel consisted of five photographers. Young Kim and Jovell Rennie are both photographers based in Anchorage, Alaska. Through his work, Young approaches immigrant culture in Alaska, aiming to create images that tell a story. Jovell is now a wedding and lifestyle photographer, and the duo own a small gallery with friends that is situated next to their studio. The gallery serves to exhibit the work of upcoming artists, forming a creative community in a place that isn’t renowned for it. Sean Marc Lee is a freelance photographer based in Taipei, while James Bailey—better known as @yimmyayo—lives in Los Angeles and is a designer by trade, but embraces the overlap between photography and design. Donnel Garcia resides in Vancouver and acts as the in-house photographer for a fashion boutique.

Over the course of the session, we unveiled some interesting ideas. This Session is not all-encompassing on the subject but included worthwhile points for you to consider as you aim to analyze and assess your work.

As a small note, in retrospect, we should have cast a broader net to have greater diversity in our voices. The idea for this MAEKAN Session emerged from a few friends talking in a private chat group. We’ll definitely aim to do better next time. Thanks to CC for holding us accountable.

Why is Critique Important?
The overarching opinion of the panelists is that critique forms the foundations of understanding yourself and your own work. By providing a variety of viewpoints, critique can be the test of whether your work challenges perceptions in some way rather than being universally easy to digest. In answer to one of Eugene’s questions, Donnel raised an idea that would recur throughout the conversation: critique is a form of collaboration.

The Emotional Reaction to Critique
Regardless of which field we work in, all of us will meet critique during and throughout our life. Although critique at first may be hard to take on board, and is often seen as a personal attack, regular exposure to the opinions of others in relation to personal work is essential. Over time, the way we react to critique changes. Jovell illustrates his changing reaction to critique in saying that when he began publishing his work, “You couldn’t tell me not to touch a stove, I’m going to touch it anyway and get burnt.” Since then, he has learned that it’s naive to not pay attention to critique, if someone has taken the time to write about his work, he will always read it. From there, it is his choice on whether he will implement any changes, but with age he has gained an appreciation of the potential value of criticism. For James, having been formally trained in design, critique is something that he became accustomed to from an early age. In contrast to James’ experiences, those who enter a creative field through a less formal route may have to take time to learn how to react to criticism.

The Balance Between Critique and Personal Attacks
Jovell’s comments on being burnt spark a conversation about balance. Although being burnt is—in Jovell’s opinion—the surest way to learn, James argues that in a self-driven field like photography, learning the hard way can sometimes kill passion completely. There must be a balance in criticism, without a constructive aspect to it, criticism can come across as a personal attack.

With the ubiquity of Instagram, formal training in photography is no longer a prerequisite for success in the field. This raises problems. The panel attribute the noticeable lack of constructive criticism on social media to the fact that critique was never formally engrained into up-and-coming photographers. Sean remarks that in a world that is driven by likes and positive reinforcement, criticism is often reduced to hating, “The phrase ‘why are you hating? I’m just doing my thing’, sometimes it’s not about ‘doing your thing.’” Sean’s example refers to Donnel’s earlier idea that critique is a form of collaboration. In contrast to the collaboration and dialogue of constructive criticism, labelling criticism as hate is a way of isolating your work. In this way, social media is not optimized for criticism. Most photographers will not look to social media for critique, thanks to the culture of ‘likes’ and positive reinforcement that it encourages. On Instagram, everybody has their own profile, their own followers. The structure forces a self-serving attitude. A community mindset that works towards the improvement of work is unrealistic on the platform.

The Inclusive Nature of Social Media
In the same way that formal training is no longer required to be a successful photographer, social media also means that experience in a field is not required to state an opinion. Being aware of this is central to discerning what is legitimate criticism that can benefit your work, and what is uninformed and unfounded critique. This said, both Sean and Young see the inclusive nature of social media as a good thing. For Sean, receiving criticism from those who are not photographers is generally preferable because it comes from a genuine, emotional place rather than theory or training. In Young’s opinion, the most important feature of any criticism is that it is justified. When justified, criticism is valid from anyone.

Critique, where?
If, as the panel agreed, social media falls short on providing a platform for critique, where can creators find constructive criticism? Sean suggests that sending a message to someone that you respect can’t hurt. If you can get past being afraid to hear somebody else’s opinions on your work, then you can be much more open to a beneficial dialogue. By showing interest in a message, perhaps making a note of something that a creator has done in the past that has affected you, you can personalise a message or email to someone more experienced than you. James sees opening a dialogue as the most essential action, by sending a message to an established creator in the hopes of constructive criticism, you open the door to a conversation that may carry great benefits with it. In contrast, “If you’re just screaming into the ether then you’re not going to get much back.”

Understanding the Context of Critique
Critique changes from situation to situation. The context of criticism is an important consideration when taking advice on board. Sean compares criticism of client work and personal work, “The goal is for that to fuse into one thing, to be one and the same—to be hired for the way we create personal work. The reality is that that isn’t always true and there are concessions you have to make when doing client work. There’s always a fine line, and a lot of that comes back to dialogue, to find a mid-ground. That’s essentially what critique is, aligning your views with those of others. It’s a social act.” Like the distinction between critique of personal and client work, critique can have a different meaning depending on where it comes from. James approaches this dynamic when a viewer raises the subject of gender in critique, “Gender plays a huge part in the critique process whether you acknowledge it or not, because of social structures around tropes of women being more sensitive, and men being more confident. These stereotypes still exist unfortunately. This said, when you do have a female that gives critique, you can recognize that it takes a lot more for them to put themselves in a position where they could and may well be dismissed.”

After discussing various aspects of the process of critique, several topics stand out. For Eugene, it’s essential to know your audience and what resonates with them, this way you will know how best to speak to them and to communicate criticism without it appearing as an attack. A starting point is understanding your own emotions, and learning to begin an internal dialogue, if you like something or don’t like something, understanding your own emotions towards it will help to articulate the reasoning behind criticism. James echoes Eugene’s sentiments, in that criticism starts with yourself, beginning with you asking, “What do I think about my work? And how am I going to articulate what I’m doing?” Once you have asked that, you have uncovered the possibility of allowing others to take part in that conversation too.

Criticism is a social act. Without criticism, our work stops developing, and begins to stagnate. By being able to take and give justified, constructive criticism, we opt for the advancement of ourselves, others, and our field as a whole. The self-serving and often isolating nature of social media can harm our mindsets and work, but by reaching out to those we respect, and being prepared to hear what they have to say, we can set ourselves up for growth.