The MAEKAN Classroom is a series created by the MAEKAN team to pass on the skills we’ve learned in the past few years. We don’t plan to wait until we have a “masterclass” or spent decades honing our craft to share experience and knowledge that works. We want to help get self-taught creatives started telling and publishing their stories today.

Last time, we looked at story and how to figure out the angle that will guide you through production all the way to publishing. In this second episode, we’re going to get a bit technical by going over a few tools will help you tell your story. 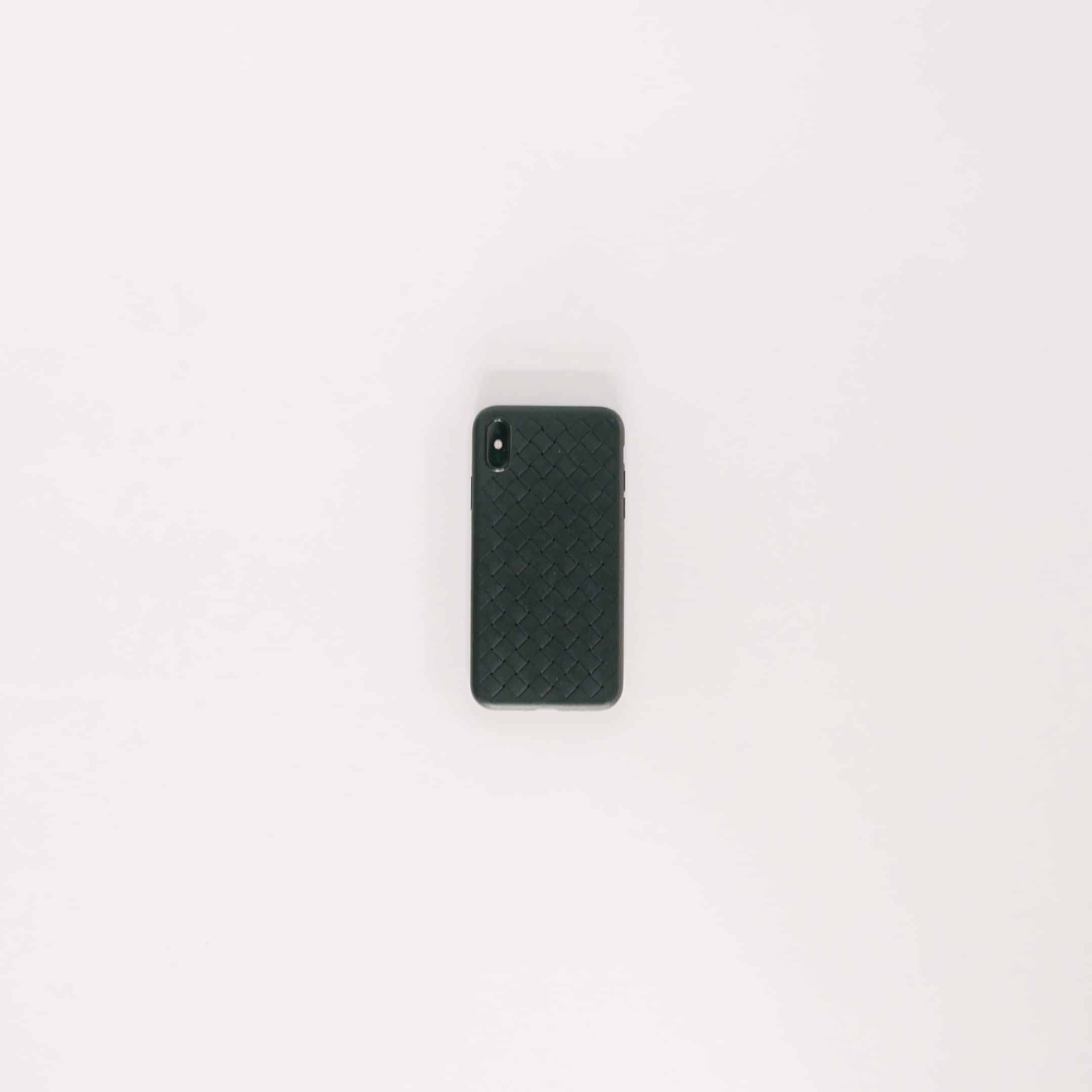 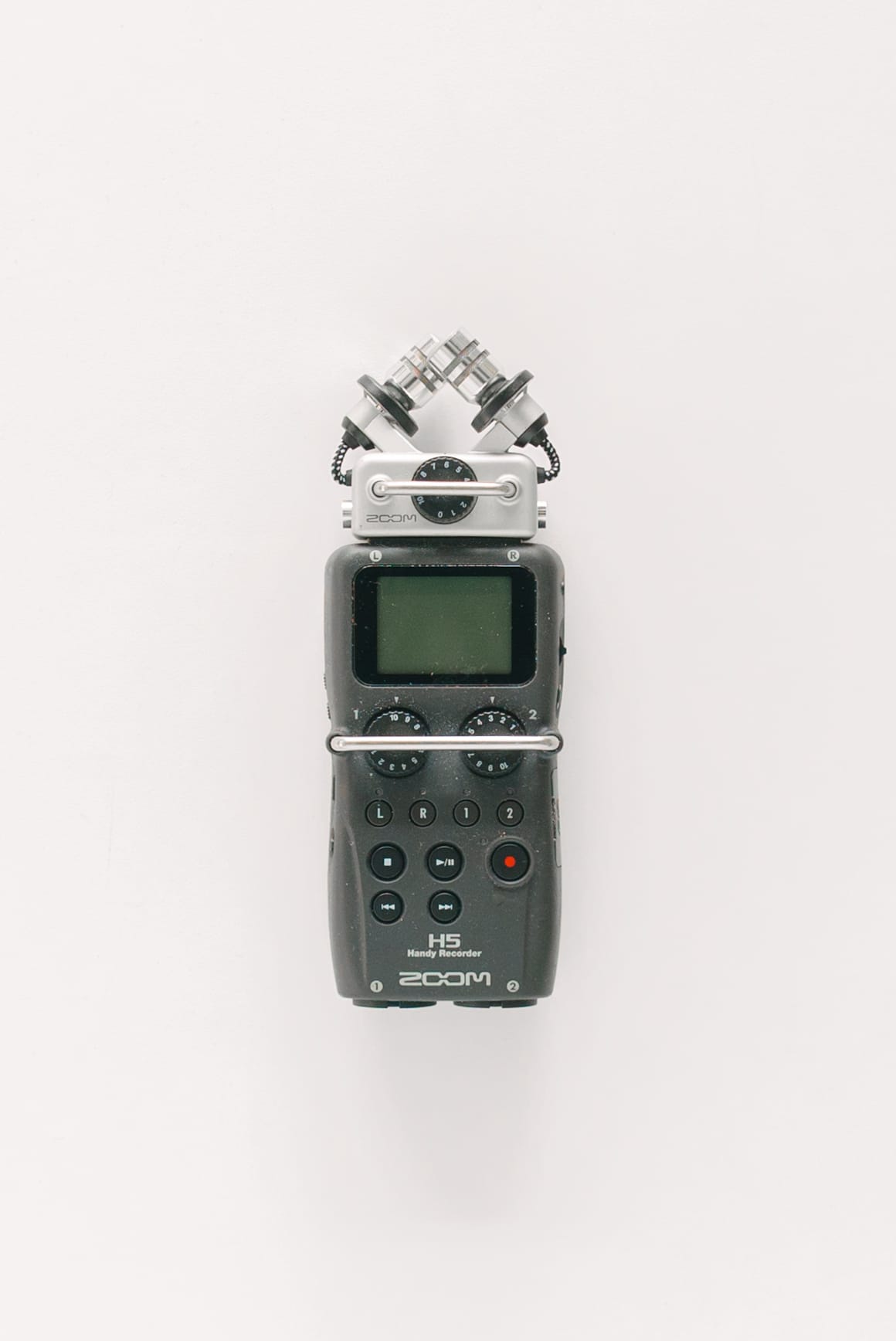 At MAEKAN, we accomplish all of our recording needs with three different setups depending on our needs, the situation and the type of equipment.

“No Frills” Setup: A smartphone and an app, sometimes with an external microphone designed for a smartphone. This is also used for instances where we’re having someone record audio remotely and don’t have a means of getting them more advanced equipment.

Basic Setup: Our day-to-day recording equipment consists of field recorders like the ZOOM H5 and H6 and either external microphones connected with XLR cables or ZOOM’s interchangeable microphone capsules.

Audio Interface: This studio-centric setup involves using an audio interface, which is essentially a box that translates analog audio signals into digital ones.

For now, in this episode, we’ll be covering the No Frills and Basic setups because they’re the most affordable, versatile and portable.

If you’re using your smartphone, you’ll be using your phone’s built-in microphone, whose quality will vary immensely depending on the model. For example, we’ve gotten some pleasant surprises from an iPhone (such as with Taliesin Gilkes-Bower’s narration here) using only the built-in mic. That said, not everyone has an iPhone and if you don’t want to buy or carry any external microphones with you, we recommend at least getting an app to handle your recording and not using the stock one that comes with your phone if you can’t control settings.

In situations where our subject doesn’t have access to equipment or where we can’t send it, we recommend they download the free version of these two apps: Voice Record Pro (iOS) and Easy Voice Recorder Pro (Android).

You certainly won’t need one if you’re just starting out, but if you choose to buy a field recorder, we recommend the ZOOM H5 because you can get quality recording with it just using the included microphone capsule (at the top of the recorder). What’s more is it’s compact, discreet and relatively affordable compared to their newer models. Bonus: only needs two AA batteries.

And if you decide to upgrade later so that you can record several things at once, you can add up to two external mics connected via XLR cable or you can get ZOOM’s interchangeable microphone capsules which work similar to camera lenses.

One thing to note is to always use headphones when recording dynamic environments or if you’re moving to different locations. Without them, it’s like taking a picture without using the screen or viewfinder.

Generally, your computer sound card isn’t designed to receive audio from an XLR microphone so that’s where the interface comes in.

Once connected to an interface, the microphone signal can feed into a computer via a cable such as USB 3.0. You likely won’t need an audio interface unless you plan to do a lot of recording in a home studio.

That said, one major benefit of an interface is you can seamlessly record audio directly into an editing program like Ableton or Adobe Audition without having to handle files. This saves a lot of time if you have to record a lot of different things and different takes.

Luckily, many dedicated field recorders can connect to a computer via USB and act as an audio interface, something we often do with the ZOOM H5 and H6.

tap
If you're recording a soundscape, adjusting the gain controls how sensitive the microphone is.
1 / 3

When you start working with audio, it can be a bit intimidating when you’re used to working only with media that you can see. To make it easier to wrap your head around capturing and editing sound, it helps to think of it like we would images:

Regardless of which device or smartphone app you choose, the most important thing you’ll need in an audio recording app is control over a few key settings for when you record.

Microphones
Regardless of what kind of recorder you’re using to capture your sound, if you plan to buy an external mic, it’ll be useful to know what kind of microphones there are and what they do. As with camera lenses, there is a huge variety in microphones that are suited for different purposes.

If you’re interested to learn more about some of the microphone types on the market, click here. 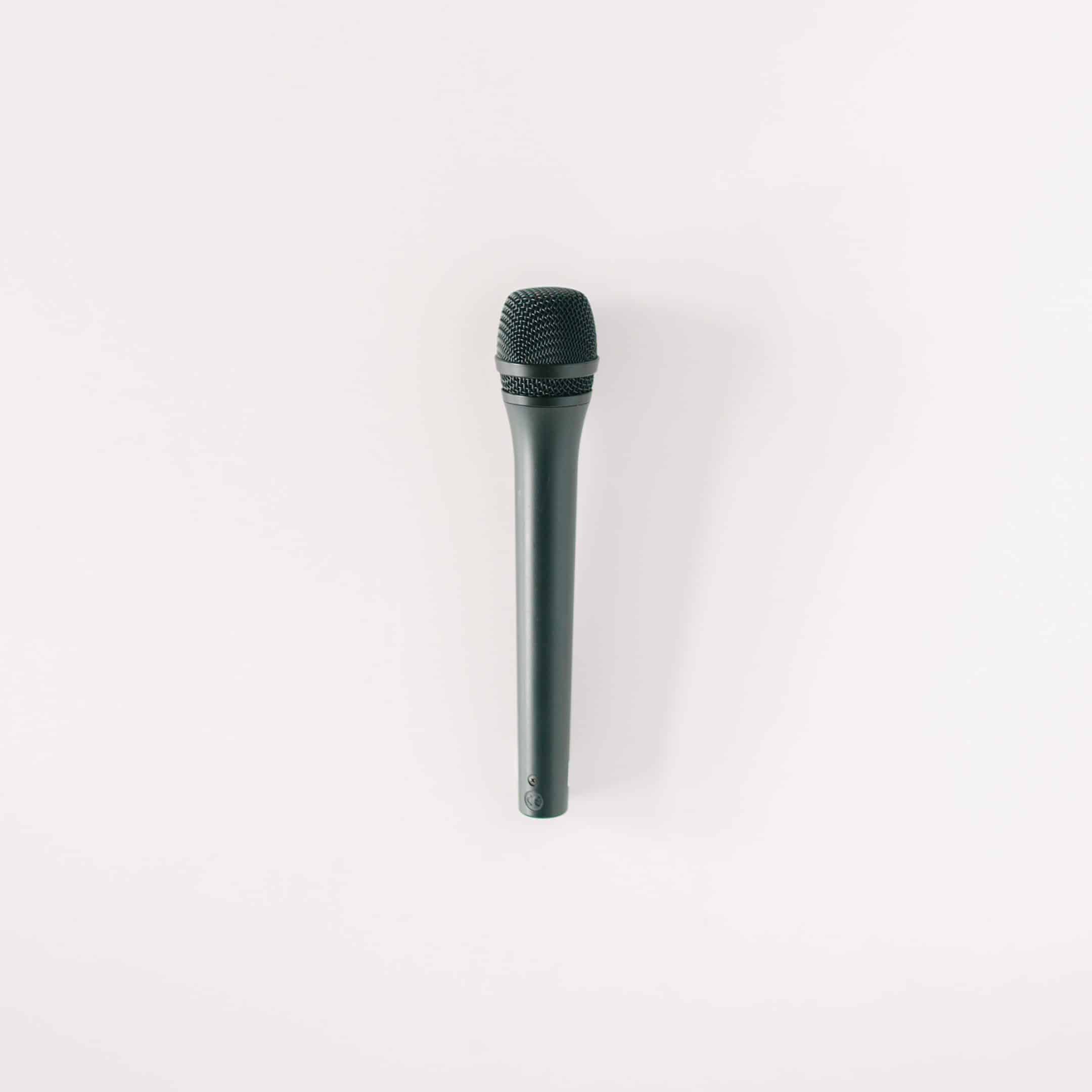 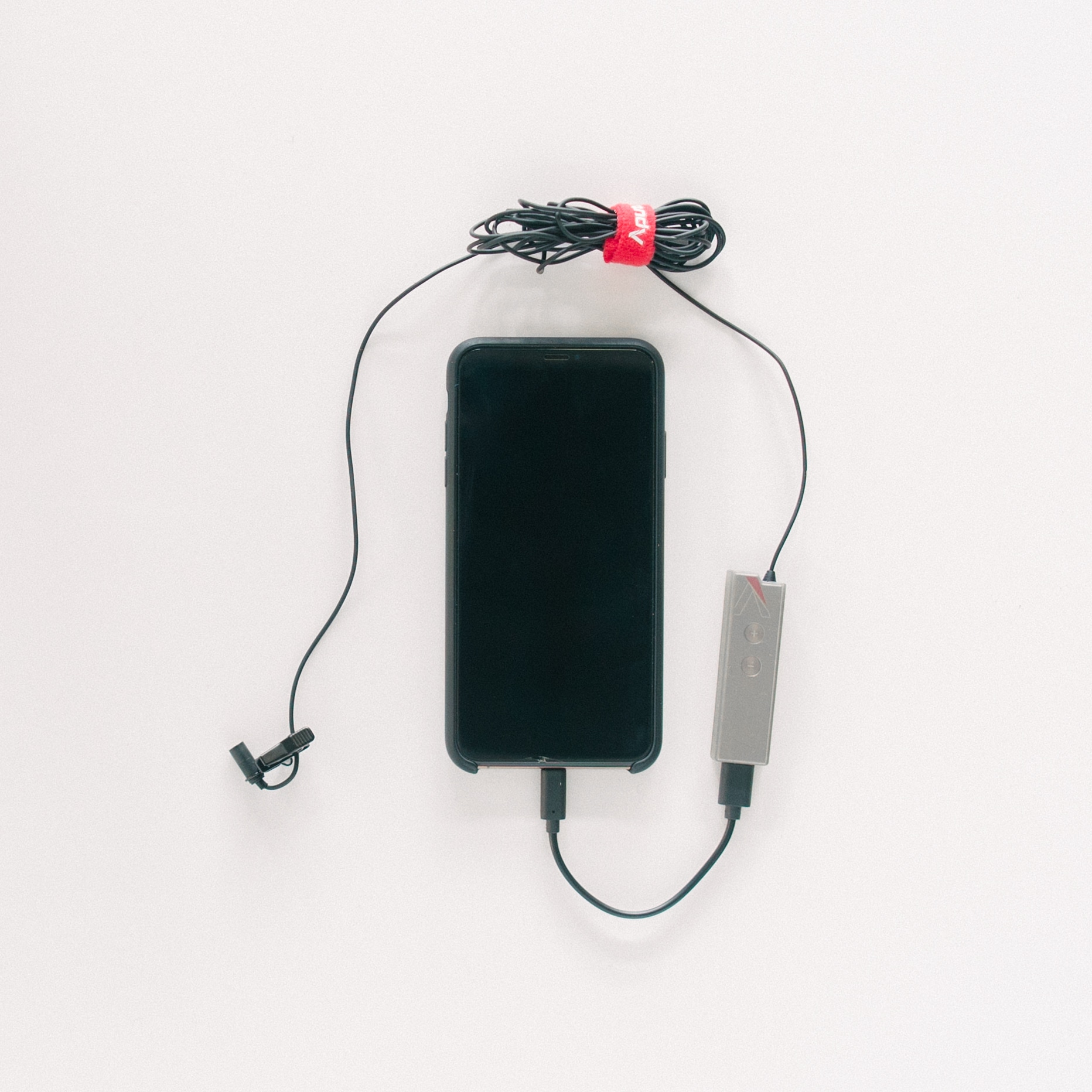 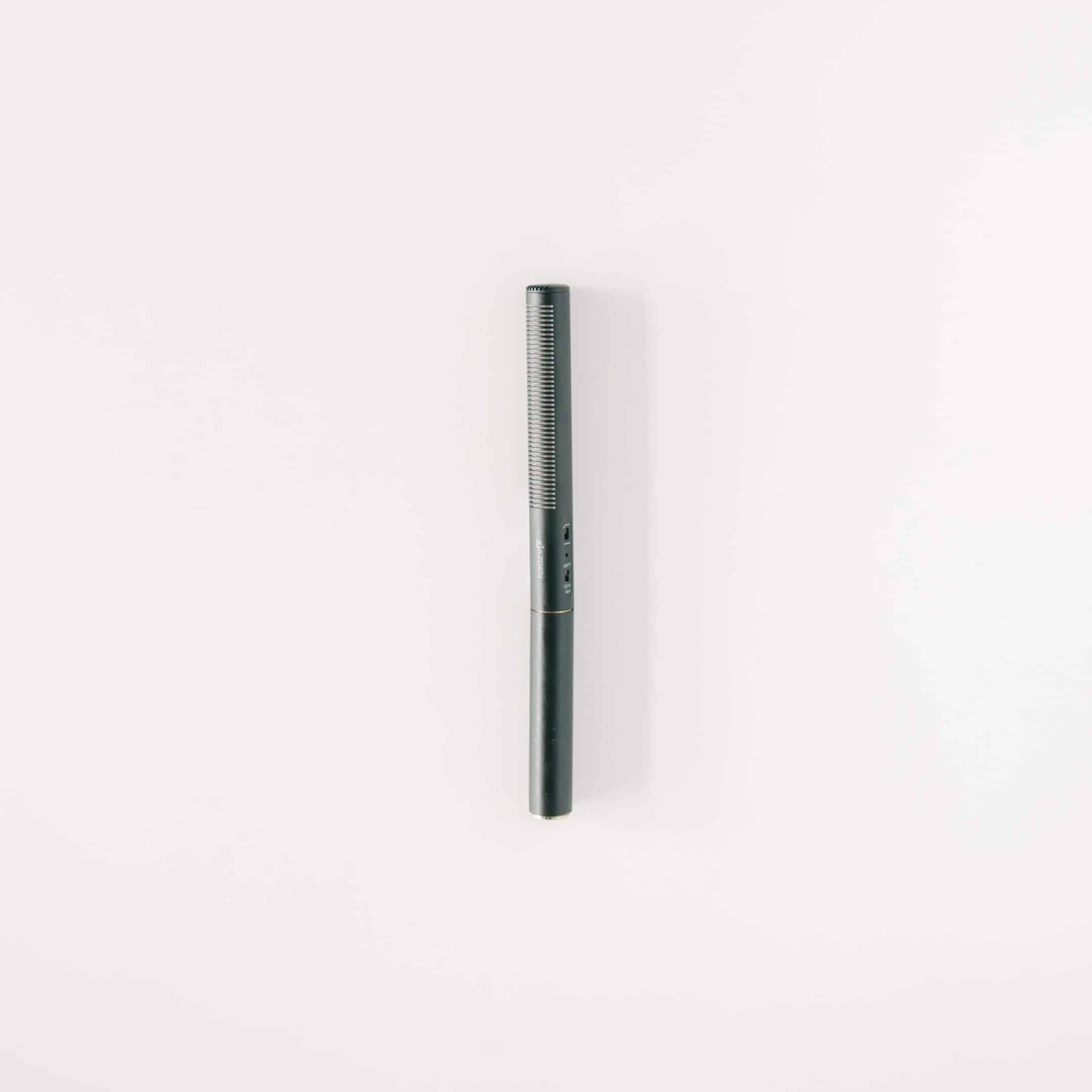 Handheld: Whether it’s mounted directly onto your field recorder or attached via a cable, the instantly recognizable handheld mic is as simple as it gets; You just point and record, for the most part.

Shotgun Microphone: Like the handheld mic, the shotgun microphone is connected via an XLR cable to the input jack on a field recorder or interface. It usually comes with a black foam windscreen (pictured) that should be used for most situations, especially outdoors. Shotgun mics are great for isolating sounds and picking them up at a distance, but are susceptible to handling noise (cables or hands rubbing against equipment).

Lavalier Microphone: Also known as a lav mic, lapel mic or clip mic, these microphones are specifically designed to record people speaking hands-free and discretely compared to a handheld mic. For this reason, they might be a better option if you want to shoot photos or video of people talking candidly without any visible equipment (for more on how to install these on your subject, check out [Episode 4: Production]).

If you can only afford to get one type of microphone for a basic setup, a shotgun microphone will accomplish most of your needs because it can pick up the widest range.

There are expensive wireless lavalier systems with both a transmitter and receiver unit, but if you just need a lav mic that can record directly to an iPhone tucked away in a pocket or under a table, consider the affordable Aputure Lyra, which uses the iPhone’s firewire port.

No matter what microphone you choose or what you’re recording, you should use a windscreen especially for outdoors recording or a pop filter if recording voices.

One particular note for shotgun mics is that they’re handy for isolating and recording distant sounds, but are also prone to handling noise which includes:

For these reasons, you can consider wearing a glove when handling the shogun mic or putting it into a shock mount, which is designed to dissipate motion and the accompanying noise.

To sum up your equipment needs:

If you have any questions or feedback on this episode or series, drop us a line at info@archive.maekan.com.