Huncho Day 2019 with The Migos and Colin Kaepernick

Colin Kaepernick has been a dominant cultural force ever since taking a knee at an NFL pre-season game in 2016. His opposition to America’s oppression of the black community sparked intense debate. While Kaepernick ultimately forced his own exile from the NFL, he has had a broader impact across several areas. In 2018, he starred in a powerful Nike ad titled “Just Do It,” which pushed athletes far and wide to take control of their destiny.

Last month, Quavo of The Migos hosted his second annual Huncho Day football event. The casual game has brought together athletes and entertainers alike with a focus on giving back to Quavo’s high school alma mater, Berkmar High School. MAEKAN Community member Gavin Guidry, a Senior Art Director at Havas, was on hand to document the day’s events. No stranger to the solidarity of Atlanta’s black community, Gavin provided his insights into the power and inspiration of Colin Kaepernick. 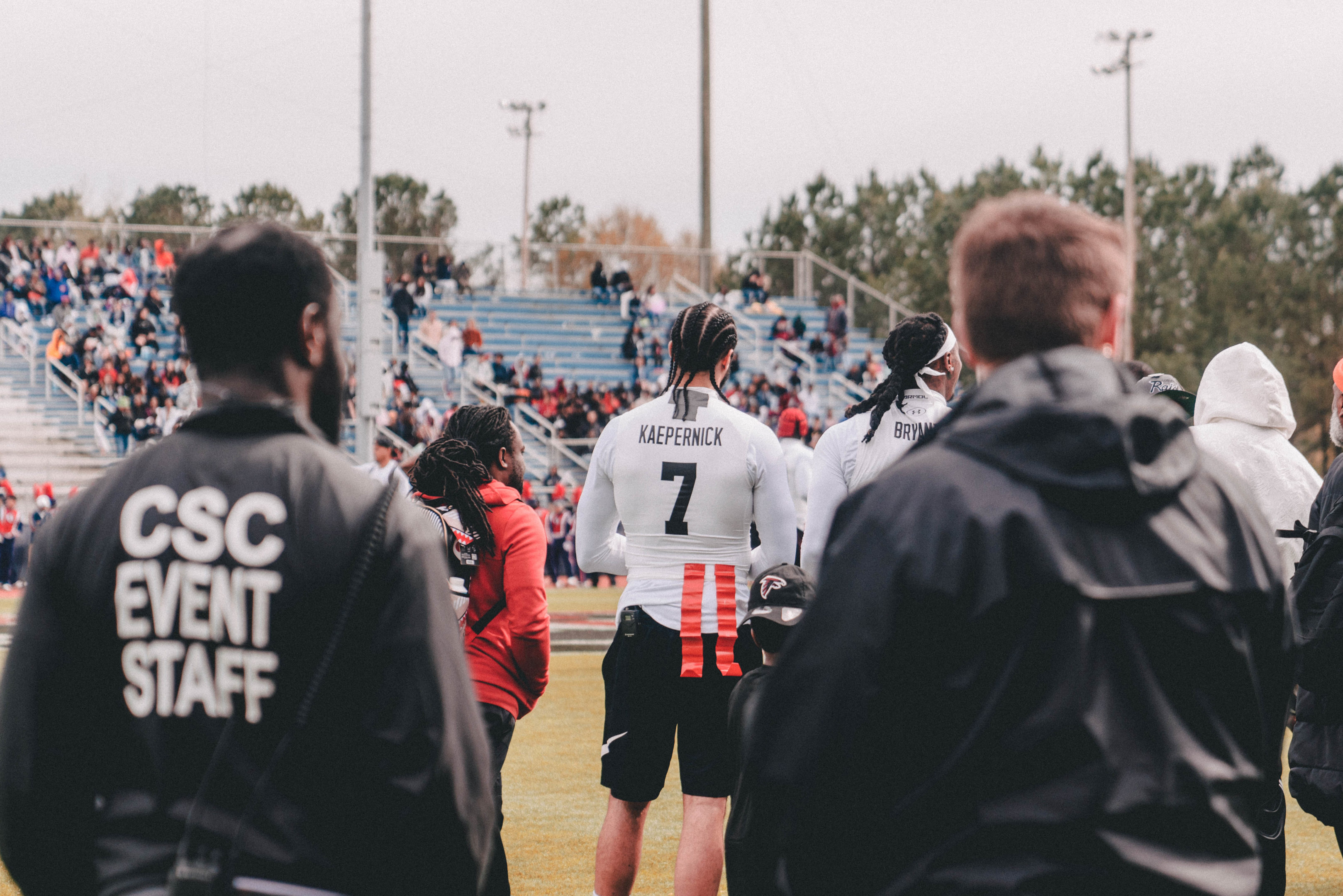 Tell us a little bit about the event. What was it was all about.

Huncho Day is a give back event from Quavo of the Migos. He was a quarterback at his high school (Berkmar High School) so his way of giving back is giving his alma matter and kids of the community a full day of fun centered around football. They have a carnival for families, a football camp for kids, and then cap it out with a celebrity game of flag football with some of the world’s biggest celebrities and athletes. 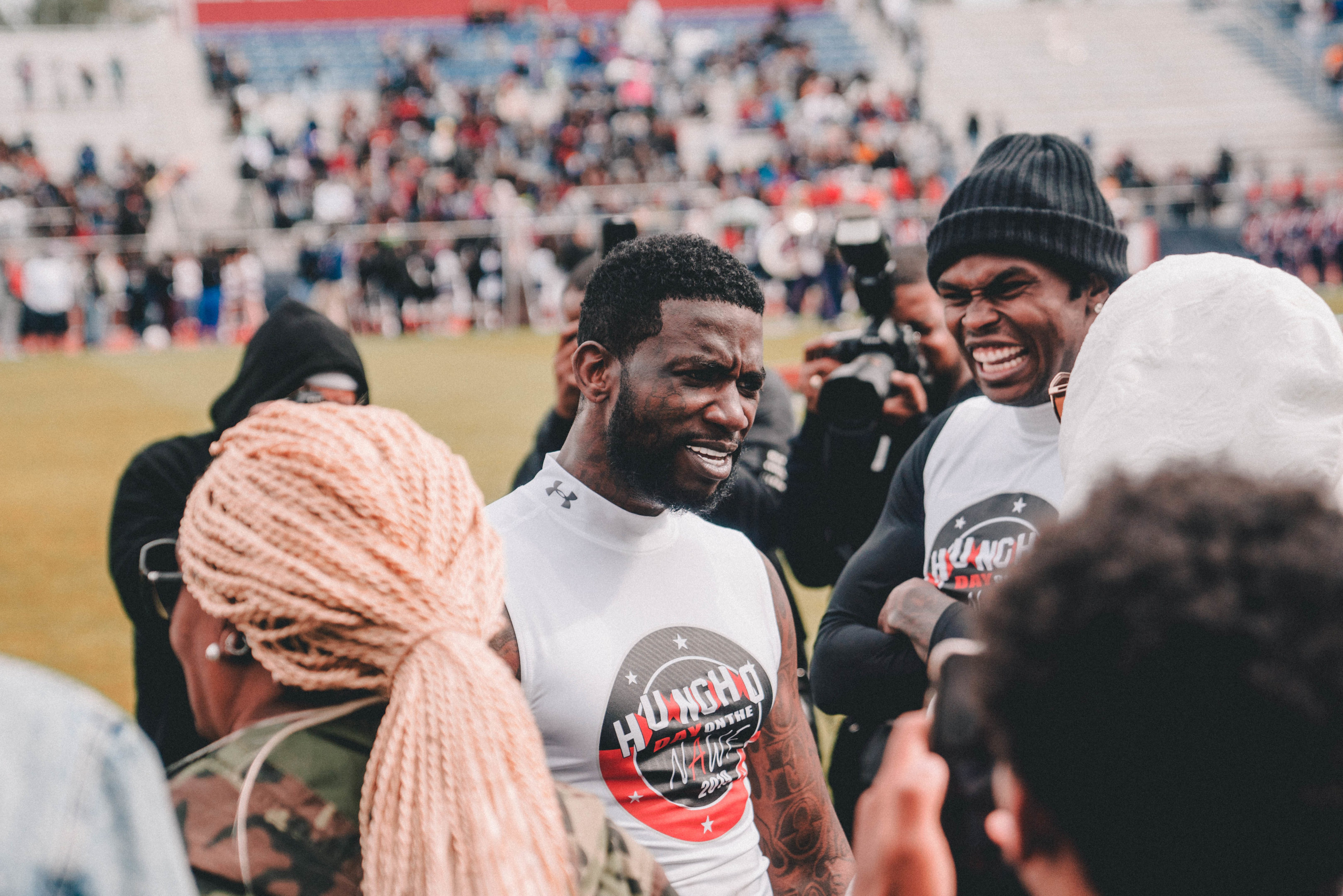 Kaepernick has been a big point of discussion over the last few years. How do you see? Athlete? Activist? Something else?

So it’s funny because I have come to see Kaepernick as this larger than life activist who is starting conversations and igniting a movement. But for this day, he was an athlete just having fun throwing the football around with his friends, which I think is probably how he wants to be seen. I don’t think he ever meant to become this huge civil rights figure, just an athlete that uses his platform to talk about things he believes in. 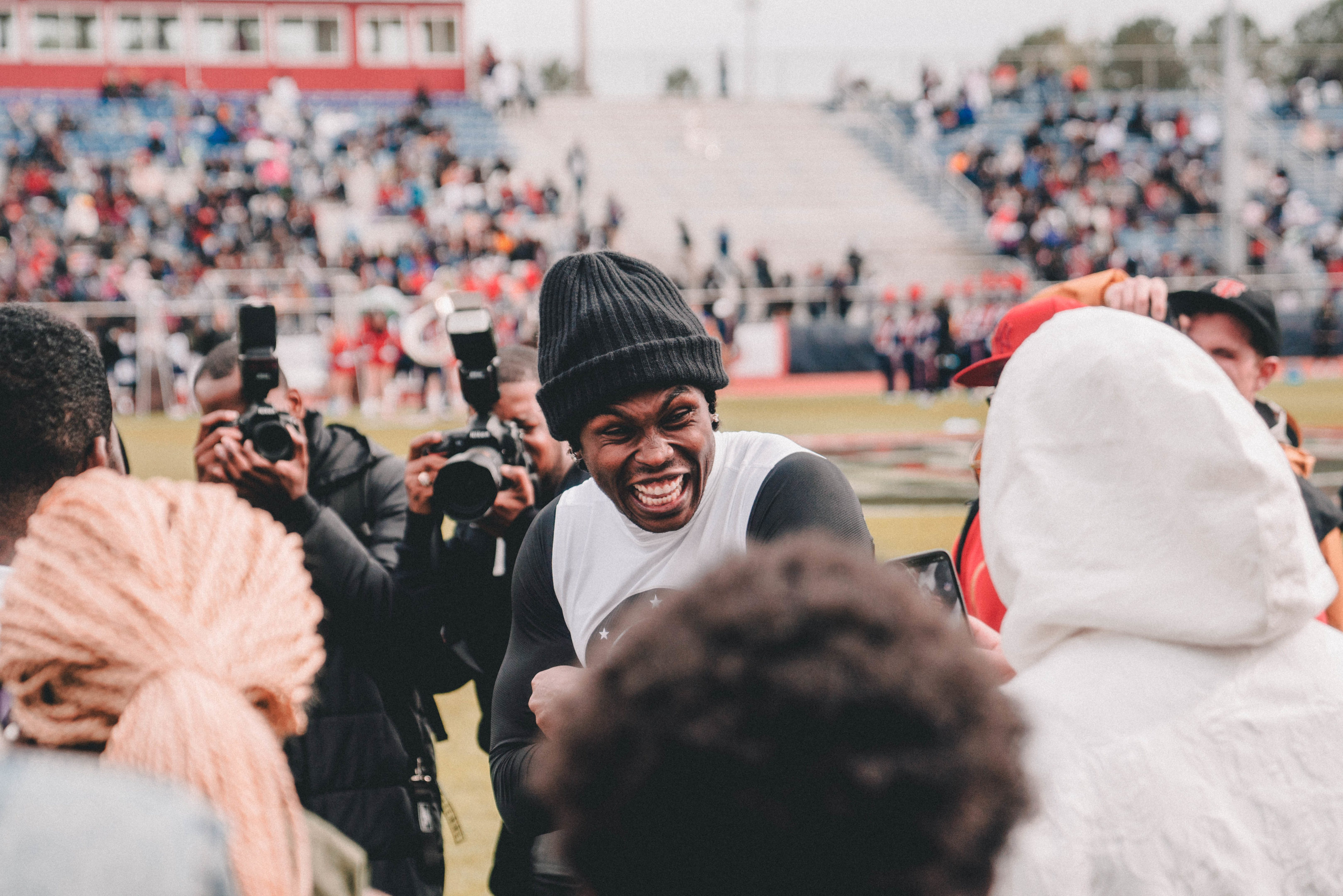 After all the focus around his most recent campaigns, what’s it like seeing him in the flesh?

Kaepernick? Well I was super shook because I knew he had been in Atlanta but had no idea that he would be there. First off, he’s like 6’6″ so his presence becomes literally larger than life. Seeing him call plays with Quavo and Julio Jones and throwing passes to Saquon Barkley made me smile because you could tell how much he enjoyed playing. He was cracking jokes and laughing basically the whole time, so I could see his love for the game. But the NFL isn’t letting him do the thing he loves right now, so it was kind of bittersweet. 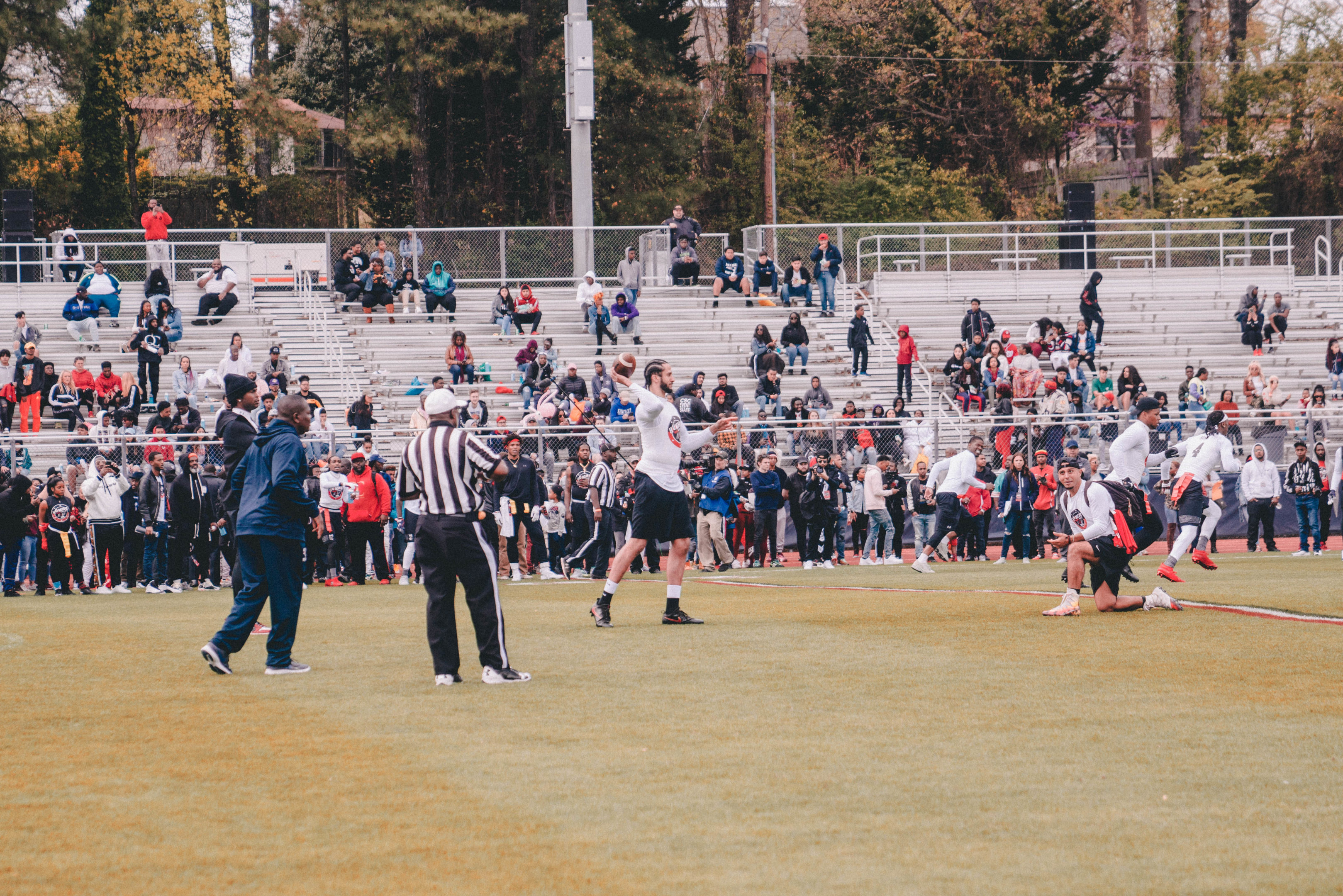 What sort of hope does somebody like Kaepernick give?

He gives hope to people that don’t speak up out of fear. When he first got cut, I think people were viewing him as a cautionary tale, but he’s been able to grow his platform and his influence to keep the conversation going. 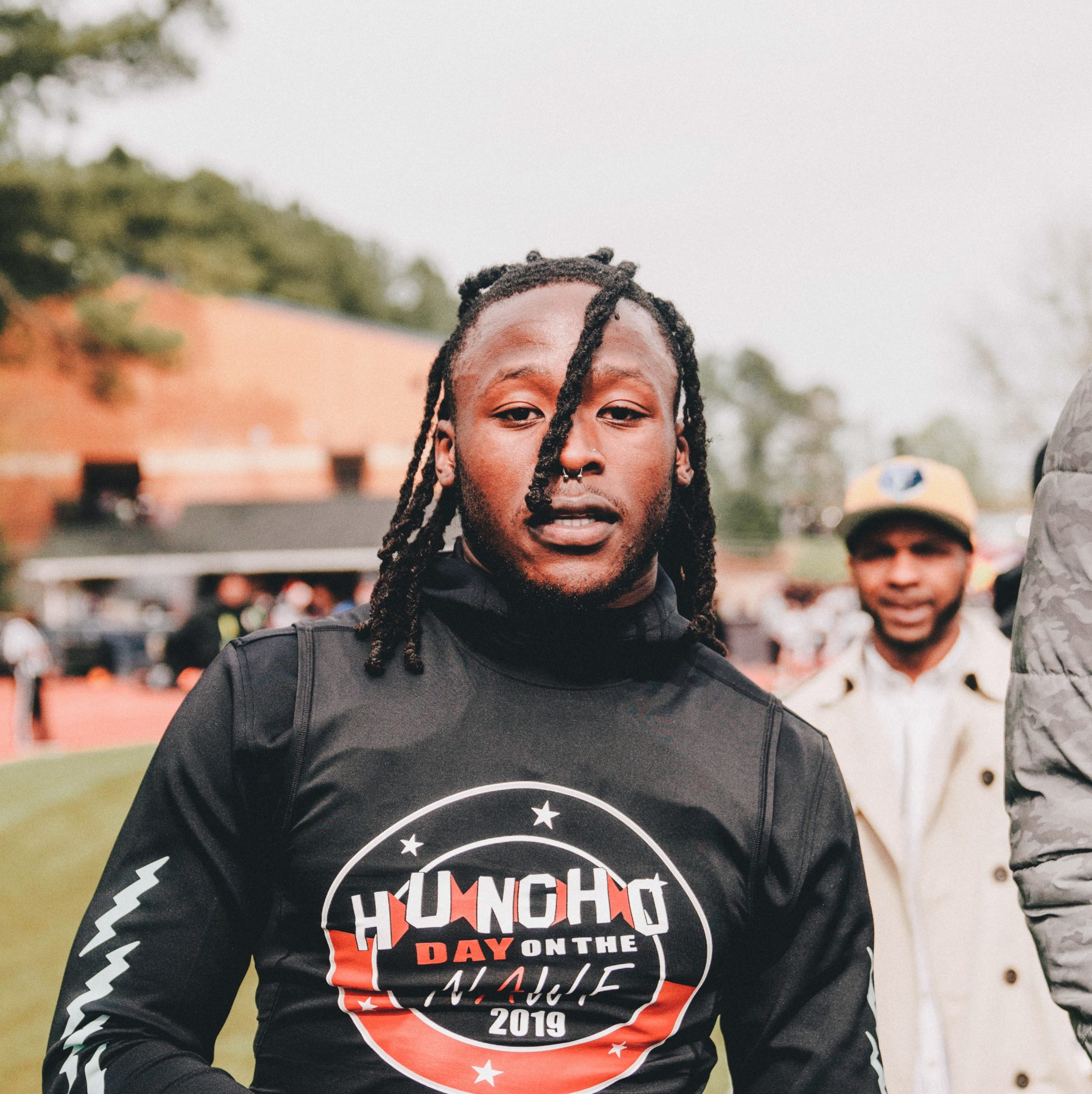 Favorite moments from the day?

Definitely seeing Kaep throw a touchdown to Saquon Barkley. Seeing Von Miller dance before every snap. Or Gucci, Quavo and Julio cracking jokes with Coach K and P from QC. The amount of love and positivity that was there is contagious. It was such an Atlanta thing. All of these celebrities, most of which were black men, came through just to have fun. I think the world needs to see more of that. 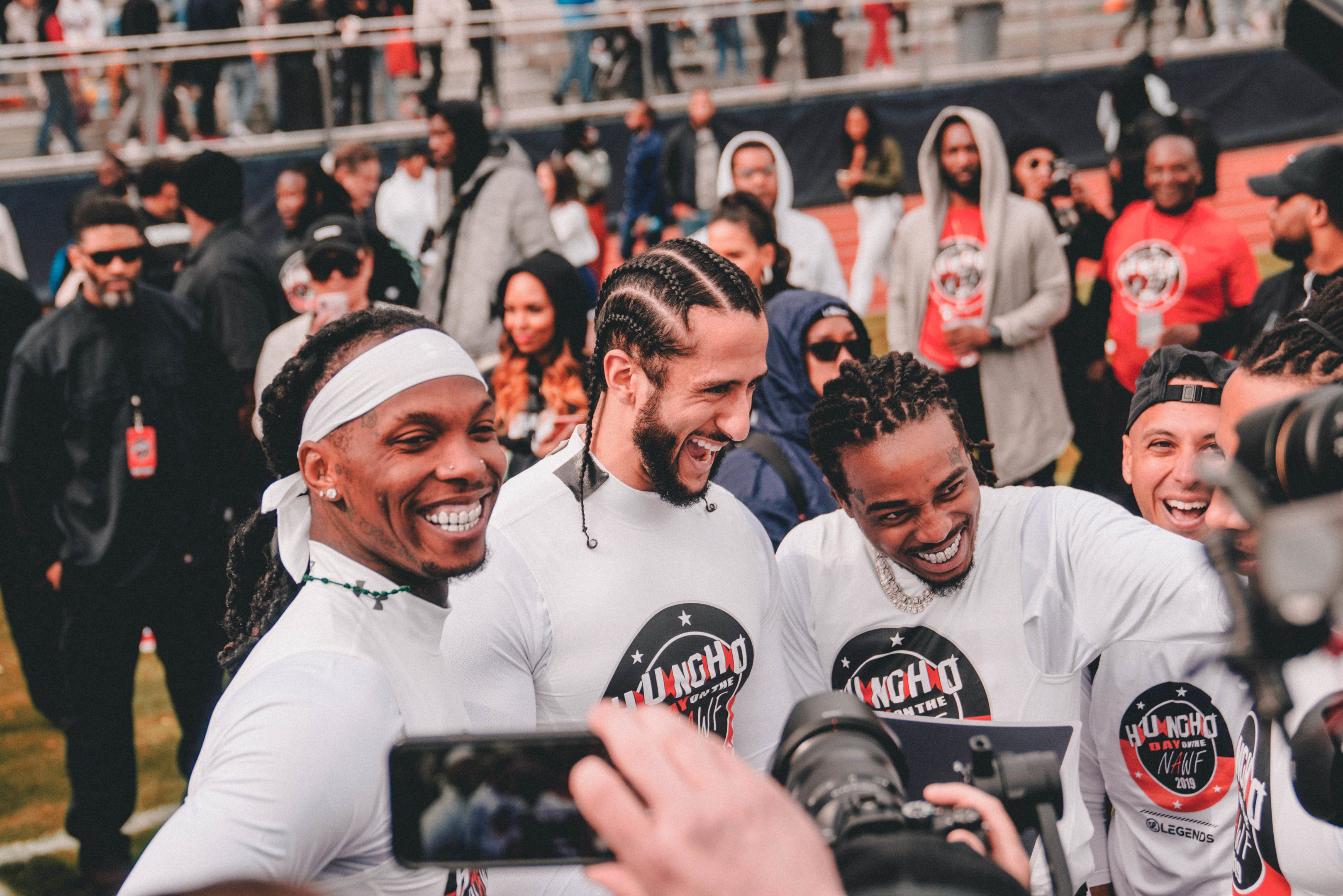 A group photo (L-R) featuring Offset of The Migos, Colin Kaepernick, and Quavo of The Migos at Huncho Day 2019 in Atlanta.