New Zealand’s pristine land and air are home to Ilya Vensky, Jerry Mauger, and Dan Bowden, founders of O2O2. But it was problems far from home that brought them together and led them to the formation of O2O2.

The human-first company is a modern solution for addressing air quality. Each of the three found a common interest in improving the quality of air. Most are familiar with the cheap masks with the elastic bands which provide a less than ideal performance outcome. Each co-founder’s unique problems led them to create a new solution built from the ground up. Ilya Vensky’s experiences were particularly critical. While living in China, his expecting wife mysteriously fell ill. Upon moving his family back to New Zealand, the symptoms subsided. Likewise, Dan Bowden’s experiences cycling in London and the health issues around commuting left him searching for solutions. The third piece of the puzzle honed in on problems on movie sets. Jerry Mauger spent considerable time in this environment and realized a traditional mask wasn’t effective. Three different experiences culminated in O2O2, a new category they’ve dubbed “facewear.”

In the formative stages of the company, it only took a few shorts to conceptualize and establish the brand’s underpinnings. O2O2’s core goal is to build a company that provides a more humanistic solution towards improving air quality. Their work sits at the intersection of both solving immediate and future challenges. The immediacy of it is to create clean, fresh air for the wearer. But a data layer provides the opportunity for users to monitor and track air quality recordings. This data collection has the potential for shifts in both behavior and public policy. It’s undeniable that O2O2’s current design conjures up memories of Google’s failed attempts at wearable tech with their glasses. The current iteration of the design isn’t a seamless integration into one’s life. Not yet anyways. There’s a certain performative aspect to it. However, it should be seen as a more technically-advanced approach to air purification and a process be likened to that of an F1 race car. We hold a firm belief in that performance in itself is an aesthetic. Looking past the designs, at some point, those developments will be more affordable, more efficient, and most importantly, accepted. The dystopian undertones are superficially hard to ignore. The belief is that O2O2 can usher in a new relationship between society and the data around air quality. These are compounding outcomes that won’t leave you breathless.

We were initially introduced to O2O2 through our friends at IISE, who collaborated with the company through a special unit. Surprisingly, fashion and its human-driven design make for a perfect partnership for O2O2. We spoke with Dan Bowden to gain some insights into the brand, its relationship with design as a platform, and how there’s more than the eye can see with the initial models. 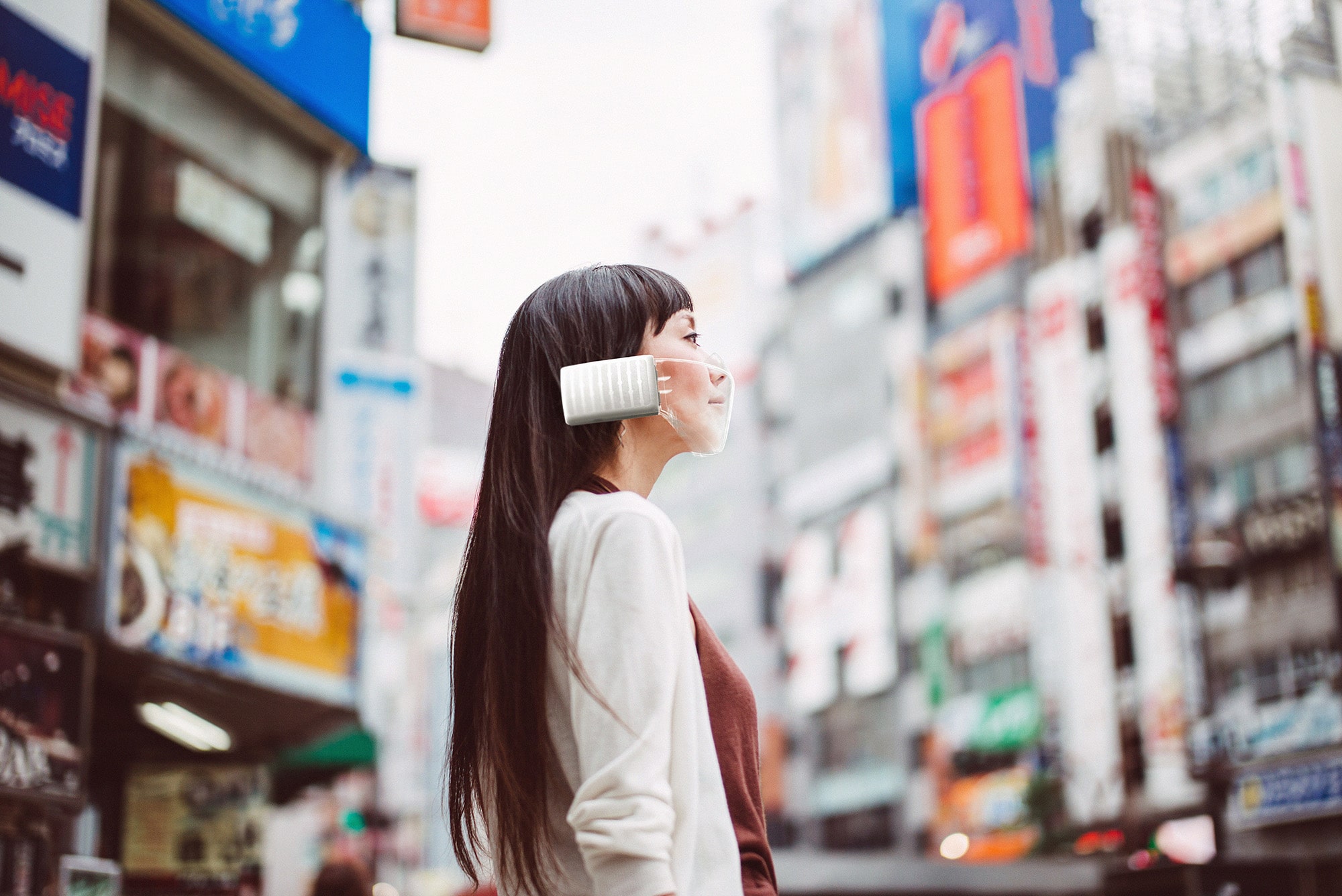 What kind of company is O2O2?

I think it’s something new. We’re a human company first and foremost, with technology that serves a purpose. But I’d hate to think of us a technology company. We’re trying to solve a problem through humanistic form and function. We’re also not fashion nor a wearable. It’s in this hazy intersection of technology, fashion, and wearables. It’s an unusual space and unique space to be in.

How did the idea come about to create your own segment? It sounds challenging.

When we first came out with this idea, everyone went “well, you’re a mask or a respirator.” Everybody had a certain ethos behind how they solved that problem. We purposefully set out to carve out own territory. You have eyewear, footwear, now how about “facewear?” It’s a brand-new solution and it’s re-purposing an existing, tried, and failed technology. 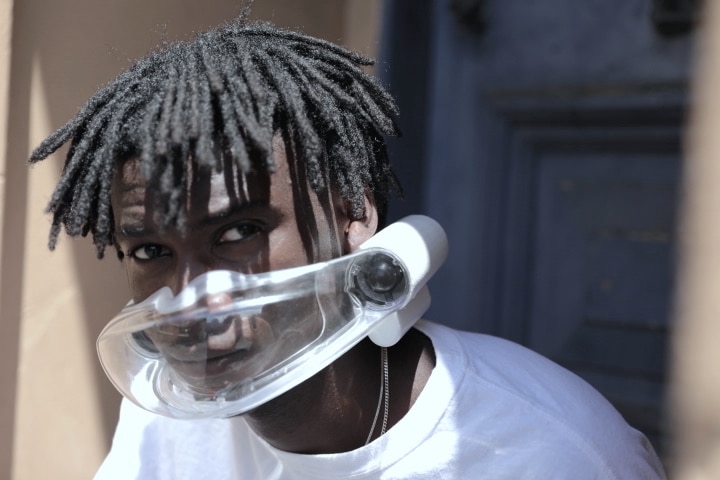 How does it work?

In short, we create a high localized pocket of slightly pressurized clean air in front of the nose and mouth. We achieve this through the use of fans on either side of the face, which pull the polluted air through an active nanofiber cleaning it in the process. This now clean air is propelled, colliding in front of the nose and mouth. When air collides, it is a higher air pressure than the ambient environment. By creating this pocket of slightly pressurized clean air, no polluted air can enter – it’s a little like the clean air manufacturing facilities, but a personalized, portable air system.

What makes O2O2 different than what’s currently on the market?

We have independent validation from our partners at the Auckland University of Technology of the performance improvements. We’re keen to hold back on the magnitude improvement over current technologies until we are closer to launch. Other than to say, it’s very, very good.

The reason for the material improvement is that traditional masks/respirators have two variables at play: 1. filtration and 2. the seal. The filtration is the easy part and we have world best in this sphere. But we don’t need the seal. The seal is the hardest item for traditional technologies because every face is different, every face moves, faces sweat, faces grow hair all of these things mean an imperfect seal. We’re simply removing the most flawed of only two variables.

Of course, that doesn’t even mention the more human benefits such as no more smudged makeup, the ability to have a facial hair, no more fogging for people who wear glasses and no more re-breathing of hot air you exhaled—where traditional masks trap the air you just exhaled, we don’t have any trapped air, quite the opposite. 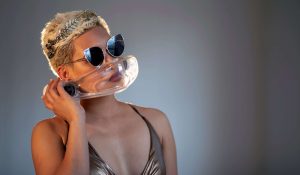 One thing that’s interesting is how you’ve layered on a technological data layer. Can you explain how that works?

There are two parts to the data. It comes as a result of what we’re producing naturally by providing the best protection against airborne pollution and pathogens. There’s data around making your personal life better and then there’s the data set around making the community and society better. Regarding your own life, we can collect data around respiration rate and volume. That’s similar to a digital health device. Overall, it can help diagnose diseases and enhance your fitness, it’s not about collecting data for data’s sake. The second part of the data is to create something that enables citizen science. Not only are you collecting data on where you’re wearing the device but the pollution on the streets. If you’re affected by pollution, you’re collecting data to solve a problem. It’s a personal connection to a problem and a personal ability to know what’s happening in society. An example, if your city has changed over to electric buses, and all of a sudden the pollution has gone down by 30%, you’ll be able to see that on a very personal level.

Amidst all the controversies around data collection, what’s the O2O2 perspective?

We see a lot of these tech companies collecting data, but for what purpose? That really doesn’t sit well with us. We want to enable people and enable societies to collect data that can effect change in your daily routine. You control your own data on a society basis. It’s data that can you can put in front of the politicians to hopefully force change. 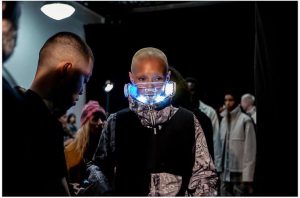 The mask and its design itself is unlike what most people are used to. What are some challenges in making it more mainstream?

What you see now is a blank canvas where collaborators and human designers can change the form and function. We own a platform, not a specific design. Just like a pair of sunglasses have a basic form with two lenses, two arms, and a nose bridge, for us we have the same potential. We know how to create the technical solution around it with the nanofibers, the fan, and shield. But after that, there’s amazing design freedom. We’re looking to work with awesome collaborators from around the world who can envision the future of this product. It’s not going to be what it is today in five years from now.

That’s an interesting way of looking at it. Consumers often have a misguided perception that what they see is what you’ll see in five years. To treat it as a platform invites a lot of potential.

The design solution is very human-driven. The typical mask is a tight seal around the mouth and nose. It means it can be difficult to speak to another person. You can’t smile at your son or daughter. It makes facial hair, glasses, and make-up cumbersome. In the medical market, somebody who is sick is subjected to a dehumanizing experience of being shut off from the world. Even if a doctor and a patient may not speak the same language, they can both speak the language of smiles. If you’re solving those human problems, you’ve got this huge amount of design freedom. 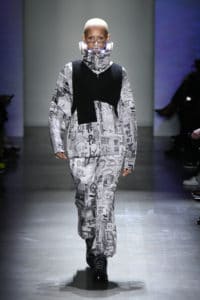 How does the role of partnership and collaboration such as fashion play into the bigger picture?

We had the opportunity to work with industrial and technology designers. But they don’t really understand the human form and they don’t work with the human body as much. If this platform is going to have a human design element, we’ve got to work with people who understand this and that’s fashion. It will be core to what we’re doing. If you look at the human body, the most prominent and valuable part is the face. If we went out and started to do this overly tech sort of thing, we’d run into problems quickly. We must work with people who genuinely understand that.

What have been some of the most pleasant surprises along the O2O2 journey?

It’s how much people have wanted to make a change and how much people are willing to do good. You get very cynical when you are coming from the business world. But when you show them a proposition where you can smile at their daughter, they can live without fear of air pollution, they do want to help and contribute.

Before starting O2O2, what did you think the journey would be and what has been the reality?

There’s this glorified version of what starting a company and being an entrepreneur is. It’s been a lot more challenging for me personally that would have ever expected. We are designing something from the molecular level upwards. We’ve got legal, regulatory, and fashion challenges. It’s a really hard thing to do from all aspects of science. What’s been pleasant is what you show people the vision, you can bring people from multi-disciplinary groups whether it’s fashion, Korean manufacturers, to New Zealand Nanotechnologists and Brooklyn-based cyclists. It’s rewarding when you can bring all these people together to solve these problems.